Channel your inner Sith, join the First Order, or maintain order in the galaxy alongside Emperor Palpatine's Imperial Army. The Dark Side deck features Darth Vader's lightsaber, the Death Star, and the Empire's fleet of starships. "You don't know the power of the dark side!" 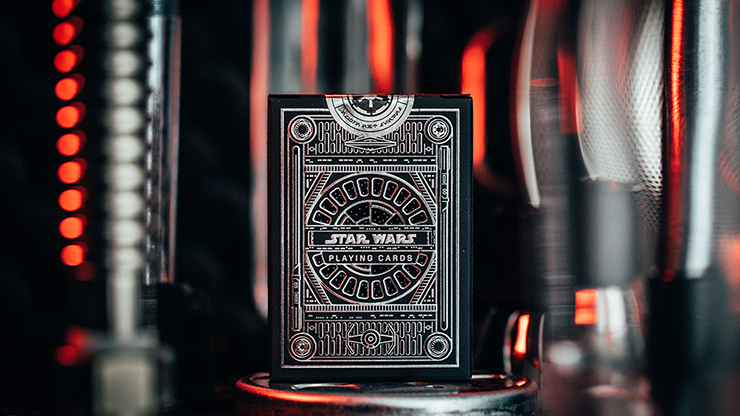 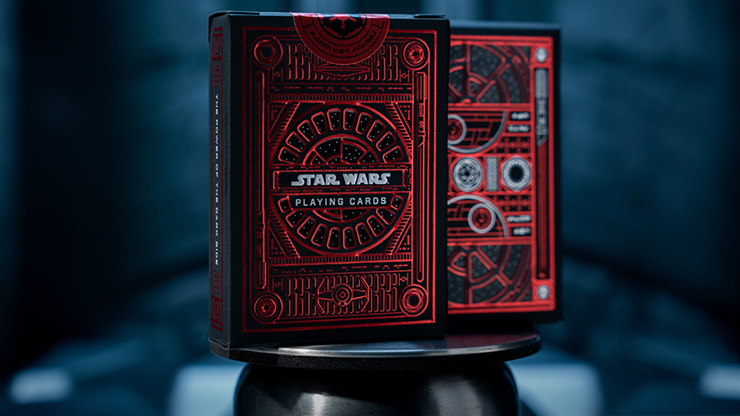 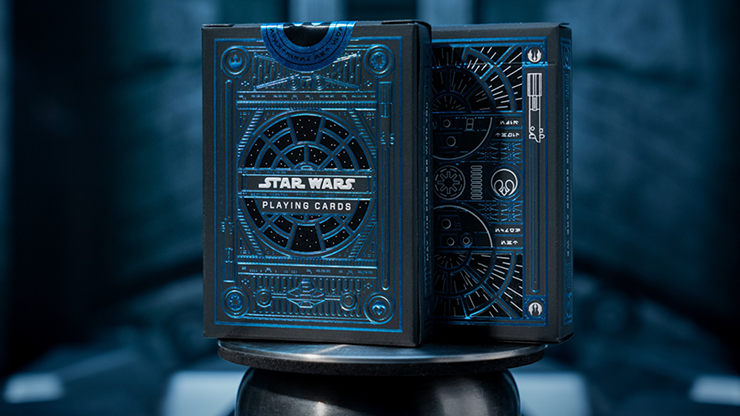 A LONG TIME AGO
IN A GALAXY FAR, FAR AWAY...

Since 1977, Star Wars has been a pop culture phenomenon. Alongside the release of Star Wars: The Rise of Skywalker, the 9th and final film in the Skywalker saga, theory11 is proud to present Star Wars: Light Side and Dark Side Playing Cards.

Join Jedi Knights, climb aboard the Millennium Falcon, and become a Rebel or Resistance hero. The Light Side deck features Luke Skywalker's light saber, R2-D2, and fighters from the Rebel fleet.
"May the Force be with you."

EMBOSSED AND FOIL STAMPED
The outer packaging is breathtaking, with striking, vibrant blue foil - mixed with clear, reflective foil that creates the illusion of the Millennium Falcon cockpit window.

Inside The Blue Box

ALL CUSTOM COURT CARDS
Both decks have the same set of 12 court cards, with iconic Light Side and Dark Side characters. Each card features detailed depictions of these iconic characters. On the Light Side: Rey, Leia Organa, Han Solo, Luke Skywalker, and more.

MADE IN AMERICA
The cards themselves are made in the USA - printed on FSC-certified paper derived from sustainable forests, vegetable-based inks, and starch-based laminates.

LOADED WITH LIGHT SIDE DETAILS
Across the blue back design, catch countless details - from the top of R2-D2 to the Rebel Alliance symbol. In the center, a repeating pattern of X-wing star fighters supports two light sabers on each side edge.

The Dark Side Box

EMBOSSED AND FOIL STAMPED
On the front of the dark side box, look through the window of the Imperial Throne Room, with symbols of the Galactic Empire and First Order on each corner.

Court of the Dark Side

THE DARK SIDE OF THE FORCE
Both decks feature the same set of 12 court cards, representing each side. On the dark side, Palpatine is depicted alongside Kylo Ren and Darth Vader - with a graphite grey back design.

THE KING OF SPADES
On the King of Spades, Darth Vader is depicted holding his light saber while taking command of his Imperial subordinates.

For the first time ever, Tally-Ho is featuring a Co-branded collaboration with Orbit Playing Cards / Chris Brown. The deck is designed by Daniel Schneider and features Bicycle thin crushed stock for that broken-in feeling! The card faces include the classic Tally-Ho Jokers and a custom Tally-Ho Orbit astronaut Joker, custom court card faces, a double backer card, and extra 8S card.

"Bee", the playing card brand that has been a well-respected brand in Casino circles for years, is now available in the coveted MetalLuxe finish! "Bee" MetalLuxe Playing Cards feature the traditional diamond back pattern card back design accented in a gorgeous blue foil. The tuck case features both blue and gold foils for an ultra-premium presentation. Each card back features the traditional "Bee" diamond back design, and is hot-stamped with real metal foil, turning this classic card back into a work of art. All "Bee" playing cards are produced with the classic Cambric finish that only USPC can manufacture which is the finish that casinos and consumers trust for optimum shuffling and card-handling. "Bee" MetalLuxe Playing Cards will be a perfect addition to the collector's assortment or will dazzle players at your next game night.

Tally-Ho MetalLuxe ® Playing Cards are the ultimate luxury collectible playing card deck. Tally-Ho MetalLuxe Playing Cards feature the classically beautiful Tally-Ho circle card back design in a collector's edition metallic foil. The tuck case and card back are both stamped with real metal foil to achieve a brilliantly dazzling shine. The tuck case features a beautiful, eye-catching red foil as well as a gleaming gold foil, while the card backs are stamped with a stunning red foil to create the classic Tally-Ho Circle Back design. The card faces have been re-colored to match the beautiful card back and tuck colors. Tally-Ho MetalLuxe Playing Cards feature a Classic Linoid Finish that only The United States Playing Card Company can produce, giving Tally-Ho playing cards that linen-textured feel. The Linoid Finish helps the cards glide off of one another smoothly while shuffling and flourishing, providing an optimum card-handling experience.